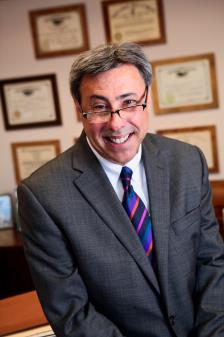 With more than 30 years’ of experience as an attorney, Lewis Levy continues a prestigious family legacy honed by his father, Abe F. Levy, Esq., and his grandfather Louis Levy (West Coast Director and IVP of the ILGWU 1937-1949), of fighting for justice on behalf of working men and women.

In his practice, Lewis represents a broad spectrum of labor organizations in both the private and public sectors, as well as employee benefit trust funds, and individuals. Lewis’ roster of clients extends across almost the entire economy: e.g., unions and trust funds representing and serving workers in aerospace, telecommunications, construction, utilities, food/warehousing, transportation, hotel and hospitality, entertainment, and the public sector.

Lewis practices before a wide variety of governmental agencies, including the National Labor Relations Board (“NLRB”), the California Public Employment Relations Board (“PERB”) as well as other State, County and City agencies throughout Southern California. He is also familiar with the complex provisions of the Employee Retirement Income Security Act (“ERISA”) and related federal/state laws governing employment and employee benefits.

A dual member of the State Bars of California and Nevada, Lewis represents many clients from both States. In addition to California and Nevada state courts, he is admitted to practice before the United States Supreme Court as well as various United States Circuit Courts of Appeal and United States District Courts. Lewis is a certificated faculty member of the Labor Studies Program at the Los Angeles Trade Technical College, instructing current and future labor leaders on the rights of their members in the workplace.

Carrying on yet another family tradition. Lewis is also a longstanding member of the Board of Directors for the Western Region of the Jewish Labor Committee (“JLC”), an organization his grandfather Louis once served. In his capacity as a JLC Board Member, Levy donates his expertise to the JLC so that JLC can fulfill its mission of bringing together the Jewish community and all facets of organized labor.

Levy received  his Juris Doctor from Southwestern Law School in 1982 and was admitted to the California Bar in November, 1982. He then successfully sat for and was admitted to practice in Nevada in 1984. Lewis received an Associate of Arts from Menlo College in 1977 and a Bachelor of Arts in History from Santa Clara University in 1979.